Is Hamas flying under the media radar? 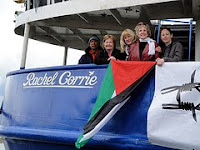 The “Rachel Corrie” is within 100 miles of Gaza, according to some Twitter reports, and the Gaza Strip seems to be holding its collective breath. Meanwhile, troubling internal events have received little media attention.

On Monday morning, just as Hamas leaders were holding a seaside press conference on the flotilla tragedy, six officials from the Hamas Ministry of the Interior raided the office of Sharek Youth Forum in Rafah, Gaza. Similar raids took place on Monday and Tuesday at five other Gaza NGOs: The Future Builders Society, the South Society for Women’s Health, the Women and Children Society, Palestinian Mini Parliament, and the National Reconciliation Committee.

Sharek volunteer Nida Yasin (pictured on right) was alone in the office and “cooperated silently” as the agents inspected files on the computer, seized a 30-page paper file containing lists of NGOs working in Gaza, and demanded keys to the office. Later that day, Hamas police removed a computer and a printer from the office, replaced the locks, and shut down the office indefinitely.

A Palestinian human rights organization called Al-Mezan issued a statement condemning the raids, “which were carried out without any respect for the law.” Al-Mezan also questioned the curious timing of the raids “amid the outcry against the Israeli crime against the Freedom Flotilla.” Hamas has not yet commented on the matter.

The Hamas raids come in the wake of a May 23 attack on a United Nations Relief and Works Agency (UNRWA) beachfront summer camp facility. Twenty masked gunmen torched tents, vandalized bathrooms, and tied up the security guard. They then stuffed the guard’s pocket with three bullets and a note threatening to kill the UNRWA operations director and two other employees unless they cancelled the summer games. The summer games (pictured above, courtesy of UNRWA) serve over 250,000 Gazan children.

The gunmen were likely connected to an unknown group called The Freedom of the Homeland, which released fliers deriding UNRWA for "teaching schoolgirls fitness, dancing and immorality." Another unknown group called Refugee Rights released fliers saying that the UNRWA Summer Games cost $20 million dollars, teach impudent practices to Palestinian girls, and waste money that should belong to the Palestinian people.

Sharek Youth Forum organizes the beach activities for the UNRWA summer games and helps to interview potential staff members. The day after the attack on the UNRWA facility, Hamas police forbad NGOs, including Sharek, from organizing a protest demonstration, citing security reasons. Recently, the Hamas Interior Ministry announced arrests in connection to the attack, but has not released any names.

Yousef Abu Amra, Sharek’s Southern Area Coordinator, said he had “no idea” why Hamas shut down their Rafah office. (The organization’s four other offices remain open.) The Rafah municipality is currently negotiating with the Interior Ministry on Sharek’s behalf. Abu Amra has demanded that Hamas provide an explanation for its actions.
Posted by Ashley Bates at 4:05 PM