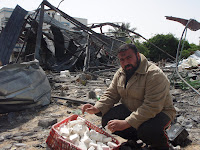 Last night, Israeli bombs struck 13 sites across Gaza. One of the sites, a cheese factory in Gaza City, was already swarming with reporters by the time I arrived around 10am. It was impossible to imagine what this factory looked like yesterday—only contorted metal, heaps of rubble and buckets of rotting cheese remained.

Most people I talked to in Gaza were surprised that the bombings had not come sooner. The bombings were in retaliation for recent Qassam rockets attacks and for the killing of two Israeli soldiers in Khan Younis last Friday. Israel alleges that the factory stored or manufactured weapons, while the factory owner claims it was used only to make cheese and yoghurt. I saw no signs of any weapons, but there's no way to know. The same factory had been rebuilt after Israel destroyed it during last year’s Gaza War.

Most of the journalists at the scene were video journalists from Arab news networks, and we all wanted to interview factory owner Motasem Dalloul. When it was my turn, Mr. Dalloul and I sat down in the shade away from the crowd. I was struck by his calm, almost jovial, demeanor as he described his "very nightmarish" experience. Neighbors and relatives approached frequently to say “thank God for your safety.” He looked at me intently and said “this is our life” many times during our 30 minute conversation. 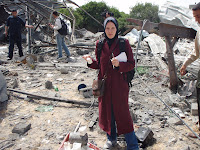 Mr. Dalloul’s family was sleeping in their home adjacent to the factory and awoke to the boom of the explosion. Shards of rock and metal broke through his windows, but did not injure his wife or seven screaming children. Mr. Dalloul shared the whole story in English. As I asked him more about his background, I was surprised to learn that he is a widely-published freelance journalist for Al-Jazeera English, Ramattan News Agency and Islam Online. In an uncanny role reversal, his personal story was now making headlines.

Mr. Dalloul started making cheese by hand at age 17 in one of many stores owned by his father. At the same time, he earned a degree in English Literature from the Islamic University of Gaza. As his small business flourished, he hired 12 full-time employees and purchased automatic equipment. In 2006, his brothers took over supervision of the factory’s daily operations as he pursued a journalism career. “I felt that journalism can help the Palestinian cause,” he said, “but our cause has been taken by foreign journalists who are biased because their governments support the Israeli occupation.”

Over the last four years, Mr. Dalloul has published more than fifty English-language news articles on diverse topics, including: Gaza’s electric shortage, war trauma suffered by children, the plight of Palestinians seeking medical treatment abroad and the effects of raw sewage dumped into the Mediterranean Sea. Recently, he began teaching an Advanced Media Writing course at the Islamic University of Gaza. 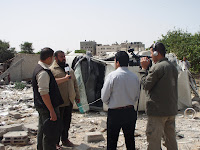 Last fall, Mr. Dalloul received a student visa from the British government to complete an international journalism master’s degree at Westminster University. However, because the Gaza-Egypt border was closed, he couldn’t leave until January—more than three months after the program had started. On January 3 of this year, he flew from Cairo to London, where he was detained by immigration authorities at Heathrow Airport.

This first experience outside Gaza ended in disaster. “[The immigration authorities] told me that I won’t be able to enter the U.K. because I was too late,” he said. “I told them that I wasn’t the reason for being late. I was surprised that they didn’t know anything about the siege and about Gaza. The feeling that made me decide to study journalism was supported when I realized that these highly educated people don’t know anything about our cause.”

British authorities did not permit Mr. Dalloul to contact people he knew in the U.K., including the university admissions director who later “expressed his sad feelings about what happened.” Upon his return to Egypt, he was imprisoned for one week by the Egyptian police before the Gaza-Egypt border finally opened. He was accepted for this year’s journalism program at Westminster and is beginning the visa application process once again.

Mr. Dalloul insists that he has no allegiance to Fatah or Hamas, does not provide support to any armed groups and has never been arrested or charged with any crime. “My view about this conflict is that the Israelis must leave Palestine but I haven’t decided what means should be used to make them leave—peaceful ways or military resistance or going to the international community,” he said.
Posted by Ashley Bates at 1:07 PM