A Growing Risk for a Repeat Sewage Tsunami

Most of the Gaza Strip went without electricity for 16 hours today as fuel shortages and alleged internal Palestinian political disputes caused Gaza’s only electric company to shut down completely. If the fuel and electric crisis is not resolved soon, it could spark wide-ranging humanitarian problems across Gaza. One site of particular concern is the Al-Masheya village of 10,000 people, located a quarter mile downhill from the Beit Lahiya Waste Water Treatment Plant (pictured above).

Typically, the sewage water at this plant remains in cement-reinforced "lagoons." However, the plant's 18-foot-deep emergency sand pits are now filling with raw sewage for the first time in almost two years as a result of the electric and fuel shortages. They could easily collapse if they reach capacity.

Three years ago, the collapse of a now-abandoned cesspool at this same plant unleashed an 8 million-gallon sewage tsunami that killed three women and two toddlers in the adjacent village of Al-Nasser. Following the tragedy, the Palestinian Water Authority installed new infrastructure that made it possible to quickly pump large quantities of the plant’s treated sewage to filtration facilities in other parts of Gaza. This negated the need for the dangerous cesspools, which were dismantled or reserved for only emergency overflow.

For the past week, an average of 2 million gallons of sewage water per day has poured from the plant’s cement-reinforced sewage treatment lagoons into two of the three overflow cesspools. As a result of yesterday’s electric blackout, 3.5 million gallons of untreated sewage was redirected to the cesspools in a single day, according to plant operators. Water levels appear to be about three feet high in some places. The third and largest cesspool, which contained more than 660 million gallons of treated sewage before it was drained in August of 2009, remains empty. 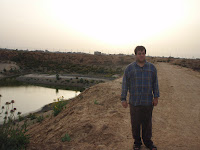 Farid Ashour, a sewage management executive, seemed thrilled to have a journalist interested in this subject. He met me within an hour of my inquiry and gave me a tour of the facility to make sure I fully understood the situation. (The picture on the right shows Mr. Ashoud standing beside the second cesspool that is beginning to fill with water. Behind him is the village of Al-Masheya.)

As I covered my nose and tried not to inhale too much sewage-filled air, Mr. Ashour pointed to the third cesspool. “In two or three months, I could once again have [14 feet] high of sewage here,” he said. “If we return to this situation, it will be a catastrophe for the Al-Masheya village. This will be worse than the previous situation, because this is raw sewage.”

Multiple related factors have contributed to this looming crisis. First, the machines that treat the sewage cannot operate without electricity. Moreover, the sewage cannot be pumped to final filtration facilities in other parts of Gaza unless it has reached a certain “quality” level—a process that takes many hours. Without electricity, the water treatment lagoons sit idle and fill to capacity, forcing operators to redirect some sewage into the overflow cesspools. Once the sewage water enters these cesspools, it is difficult and costly to remove.

While the plant contains backup electric generators, these often break and require spare parts that are difficult to import under the Israeli blockade. Additionally, the generators cannot operate without fuel. Under their contract with the Palestinian Authority and the World Bank, plant operators are not permitted to purchase widely available black market fuel that is smuggled into Gaza through tunnels from Egypt.

“[Our contract] is to buy the fuel from the Israeli side,” Ashour explained. “For the last two months, the Israeli side did not allow our fuel to enter Gaza. Once they allow the fuel to enter Gaza, the problem immediately will be solved.” Ashour also mentioned an “easily solvable internal Palestinian issue” that has affected fuel contracts between the World Bank and the local Palestinian authorities. 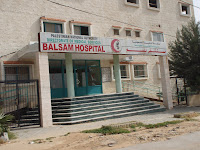 Meanwhile, the putrid odors emitted from the treatment lagoons are a telling sign that sewage water is not being properly cleaned. On April 10, the odors reached the entrance to the Balsam Hospital, located one half mile uphill from the treatment plant in the opposite direction from Al-Masheya village.