My article about Gaza's first ever demonstration against child labor in the Gaza-Egypt smuggling tunnels published Friday morning. Please follow this link to my article, as I won't re-report the story on my blog.

Youth center volunteer Anees Mansour prepared banners and placards for Thursday's demonstration and helped corral the energetic youngsters. Anees recently taught me a new Arabic expression. A hoot, which literally translates as “whale,” is a person who rises above obstacles to make stuff happen. I’ve met many hoots during my few weeks in Gaza. 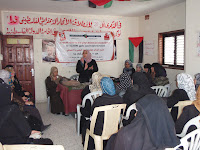 One such hoot, demonstration co-organizer Eman Abu Quta, works as a social worker at a health clinic that treats the epidemic of post-traumatic stress among children and adults in Gaza. Two weeks ago, I attended one of the educational workshops that Eman leads for Rafah women (see picture above). “What is the meaning of trauma?” Eman asked at the start of the workshop. The women then shared horrific stories from the war as they brainstormed their surface level symptoms: startling easily, panicking at the sound of an ambulance or airplane, enduring frequent nightmares and flashbacks, and feeling generally empty, depressed and hopeless. “Everyone in Gaza needs trauma therapy, including me,” Eman said afterwards.

Twenty-four-year-old hoot Ahmed Hammad (see picture on right) sparked the ideas for the rubble workers story and the sewage story last week and tirelessly helped me arrange interviews. Ahmed conducts needs assessments for a French NGO that provides food and medical support to dispossessed Palestinian families, some of whom are residing in tents. He lives in Beit Hanoun, a border town of about 33,000 people where Hamas and Islamic Jihad militants have launched thousands of crude, unguided rockets towards the Israeli city of Sderot four miles away. Israeli bulldozers have indiscriminately razed Beit Hanoun’s once-prosperous farms to prevent militants from hiding among tall crops. The Israeli military has killed many innocents in Beit Hanoun; civilians often become collateral damage in bomb strikes or get wrongly targeted on suspicion of being rocket launchers.

Three of these civilian victims were Ahmed’s close friends. On Feb. 28, 2008, Ahmed walked out towards an abandoned farm hut to hang out and smoke water pipes with Muhammad Hassanain, Ibrahim Abu Jarrad, and Muhammad al-Zaniin. Moments later, he watched in horror as an Israeli missile strike tore his friends’ bodies to shreds. Ahmed suffers many of the same symptoms as the women at Eman’s trauma workshops, including a phobia of wide, open places that were once his emotional refuge. “I feel really ashamed sometimes for being sad, for needing help,” he said. “I feel sometimes that I’m really finished, but I still have some power inside me for life. All of my hopes now are about going to the United States to study journalism, and then coming back and helping my people.”

Despite the horrors he’s witnessed, Ahmed remains committed to non-violence and Israeli-Palestinian co-existence. He fondly recalls his experience ten years ago at Seeds of Peace, a dialogue camp based in Maine. In 2005, when his local imam condemned participation in Seeds of Peace as “collaboration and normalization with the enemy,” Ahmed held his ground. He told community members he felt proud to have educated Israelis and Americans about Palestinian suffering and that some Israeli participants had refused to serve in the army. “Everyone in Beit Hanoun knows I did Seeds of Peace,” he said. “I don’t feel in danger [to tell people] because I believe in myself….I will keep saying for my whole life that if I didn’t have this experience at Seeds of Peace, I wouldn’t be the person who you’re seeing now. It was my first window to the outside world and taught me how to listen, talk, be a leader and a representative for my homeland.”

On my way back from the demonstration in Rafah yesterday, I met more hoots when I visited the Al Dameer Center for Human Rights seeking statistics on those killed or injured in tunnel accidents. Inadvertently, my arrival around 3 p.m. interrupted an emergency meeting of five major human rights NGOs in Gaza. Typically, these NGOs document human rights tragedies suffered as a result of the Israeli blockade of Gaza, the Israeli occupation of the West Bank or Israeli military strikes, but Hamas had just carried out its first two formal executions since seizing control of Gaza in 2007. “Hamas is creating much more work for us,” Al Dameer General Director Khaleel Abu Shammala said as he exited the meeting to speak with me.

On the Wednesday night before, Hamas officials had called the families of two suspected Israeli collaborators and ominously advised them to visit their sons in prison. Shortly after 8 a.m. Thursday morning, one of Al Dameer’s field workers, 30-year-old Ali Shaqqura, had received a frantic phone call from one of the family members. Hamas had just informed the family of their son’s pre-dawn execution by firing squad and instructed them to come to a Gaza City hospital at 9 a.m. to view the body. Mr. Shaqqura notified his superiors, then hurried to the hospital. “The police took my bag, pushed me and talked to me in a very harsh and brutal way,” Mr. Shaqqura said, taking deep breaths as he spoke. “But this is my duty and I must do it. I briefly talked with the families, and then the police forced me to leave the hospital.”

The emergency meeting of hoots from five human rights groups Thursday afternoon yielded a carefully worded joint statement condemning the two executions. "It is inhumane and humiliating and cannot achieve any rehabilitation,” the statement said, “and there is no chance for those punished to regain a place in the community.”