The Desperate Option of Tunnel Traveling for Medical Treatment 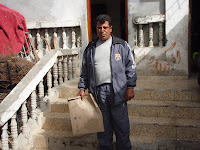 I met today with a soft-spoken village man named Abu Ala’a (see picture) who is suffering from a serious but treatable spinal condition which is causing him to slowly loose sensations in his limbs. He walks with a limp and can barely feel his left leg. His condition has reached a critical point, and if does not get emergency surgery within the month, he could suffer permanent paralysis, according to his doctor. The Gazan health ministry has requested permission from the Israeli, Egyptian and Jordanian authorities to have him treated abroad, because doctors in Gaza do not have the skills and equipment necessary for the delicate and dangerous operation.

Abu Ala’a wanted me to print his story in an Israeli newspaper because he hoped Israeli civilians might read my article and press the Israeli government to grant him a medical visa. He’s also considering one final, desperate option. “If there’s no other way, I’ll go through the tunnels,” he said, looking at the ground. “I know it’s dangerous, but not more dangerous than the danger of being disabled for the rest of my life.”

The man’s doctor, a neurosurgeon named Basil Baker, said that while “God only knows when it’ll be too late,” he was hopeful that Abu Ala’a would get permission to have medical treatment in Israel. “Some get medical visas in a month and some take longer,” he said. “Some go to the border and get turned away. If Abu Ala’a’s relatives have been involved in clashes with the Israelis, he might have to pay the bill or not get through at all.” 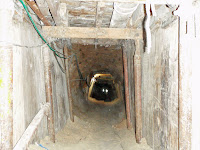 This story reminded me of a mother and father I met in Rafah ten days ago who had faced a similarly heart-wrenching dilemma. Their seven-year-old son Yousef had burst through the door one day with blood gushing from his left eye. A playmate had lobbed a small rock, which struck Yousef directly in his pupil. A doctor at a local clinic stopped the bleeding, but claimed there was nothing more he could do. Yousef’s father was unconvinced and said he “wanted to give hope to [his] son to [be able] to see. The equipment, doctors and treatments are better in Egypt.”

Only two days after the injury occurred in the fall of 2009, Yousef’s mother carried him under the Egyptian border through a 4-foot-wide tunnel owned by a family friend. Her husband encouraged her to go, figuring that women and children are less likely to be jailed by the Egyptian police. She reasoned that permits to get medical treatment in Israel or Egypt were difficult to obtain and there wasn’t time to try. Yousef’s mother told me she “wasn’t thinking about the fear or the danger” as she crawled through the tunnels because she was “only thinking about [her] son,” who cried the entire 15-minute trek through the tunnel.

While most tunnel owners charge about $2000 to smuggle a person in one direction, Yousef and his mom traveled for free. They managed to evade the Egyptian police, but doctors at the Egyptian hospital could not cure him. The giggly seven-year-old still roughhouses with his friends, but sees only from his right eye.
Posted by Ashley Bates at 11:47 AM