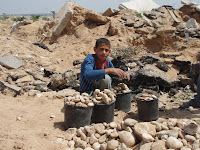 Yesterday, I visited the ruins of Israeli factories that once comprised the “Erez Industrial Zone.” These factories near the border once employed 4,000 Palestinians but were destroyed and abandoned as part of Israel’s 2005 unilateral disengagement plan. On this sweltering hot afternoon, about 200 Palestinians—many of them school-age boys— collected rocks and metal used in construction projects across Gaza. A month ago, more than a thousand Gazans were scavenging here, but business has declined partially as a result of taxes enforced by Hamas last month.

Here’s how it works: any Gazan willing to do backbreaking work within close range of Israeli snipers is welcome at Erez. Most bring a donkey, a cart, some tools, and plastic buckets. From 6 a.m. until 4 p.m., workers crawls through the underground skeletons of crumbling, unstable buildings seeking certain types of stones. If they get too close to the Israeli border, Israeli snipers fire warning shots in their direction and / or target their animals. During my three hours at Erez, I heard multiple gunshots, I saw a dead goat with a bullet wound, and I met two workers who said their donkeys were recently shot. One of these workers, 15-year-old Mokhlis Al-Masri, was working near the border a few weeks ago when Israeli troops raided the area and captured some of his friends, who are now in Israeli prisons.

In the late afternoon, Mokhlis and hundreds of others bring their buckets of rocks to an open area where middlemen and traders, including representatives from Gazan construction companies, come to purchases the rocks by the ton. The traders then transport the rocks in gigantic trucks to various locations across Gaza. Families and small businesses that can afford the expense use the rocks to make walls, roofs, patios, bricks and tiles.

While cement and other construction supplies banned under the Israeli blockade are smuggled into Gaza through tunnels (which, like Erez, have attracted desperate workers from across Gaza), rocks are generally too heavy and cumbersome to bring through the tunnels. Since the end of last year’s war, Gazans denied the supplies they need have scavenged metal and stone from destroyed buildings and used them to construct new homes. However, the Erez site is unusual in that, over a period of only six months since construction companies began seeking its rocks, it has quickly attracted thousands of workers. 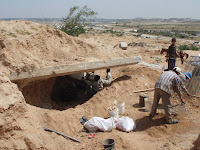 In response, cash-strapped Hamas sealed off the area last month and declared it a “closed economic zone” subject to government taxation. The only way to enter is by foot or via dirt roads controlled by Hamas, although some have used donkey paths to evade taxation of 30 shekels (about $8) per ton of rocks. Most workers collect about one ton per day and are paid 70-90 shekels per ton. One trader told me, “The government is living off the blood of the people. This area had a good income for a huge number of workers who did not have jobs. Now we have almost no profits.” 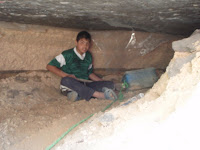 Business has also declined recently on rumors that the United Nations might begin constructing homes across Gaza. These rumors started two weeks ago after UNRWA received permission from the Israeli government to build 150 new homes in Khan Younis. This pilot project relies on construction materials from outside Gaza, and is contingent on Hamas not receiving any supplies or financial benefit. However, UNRWA has declared no plans for widespread home constructions. Middlemen believe the rumor was most likely started by major construction companies seeking to drive down the price of stones at Erez. 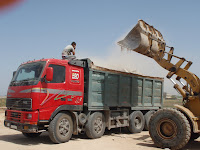 If rocks and metals are ever allowed into Gaza, it would mean a loss of income for the workers at Erez, but it would be great news for the wider population. Gazan construction companies are buying second-rate stones and metals from Erez and from destroyed buildings across Gaza because they can’t get anything else. The same supplies from abroad would be cheaper and better quality, would not risk the lives of Gazan children, and would facilitate Gaza’s desperately needed reconstruction.
Posted by Ashley Bates at 7:28 AM