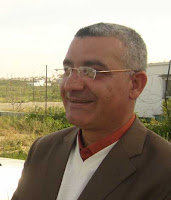 Global Post is considering running an article from me about the new Hamas fees imposed on Gazan rubble workers, a subject that I blogged about last week. To get a deeper understanding of the larger story, I met with leaders at the Hamas Ministry of Economics, who said that the fees were reasonable and consistent with their longstanding policy of charging people for taking stones and metals from destroyed buildings. I also met with Omar Shaban, a prominent Gazan economic analyst who said that Hamas was facing a “financial crisis” and imposing new fees in various sectors of the economy in an effort to support its “bloated bureaucracy.”

When I went searching for a Gazan economic analyst, no less than four journalists had advised me to meet with Mr. Shaban, who holds an encyclopedic knowledge of the issues and speaks in a refreshingly blunt and unguarded manner. As I waited to meet with Mr. Shaban, one of his assistants (a young man in his mid-20s whose name, “Jihad,” does not at all reflect his political views) compared the exodus of well-educated Palestinians out of Gaza to the exodus of Cubans who opposed Fidel Castro. “You can’t even check the internet in Cuba without government censorship,” he said. “That’s where Gaza is headed.” Jihad told me that he desperately wanted to study in the United States, but was recently rejected in his application for a visa. Shortly thereafter, Mr. Shaban arrived. “Jihad is not married,” he joked.

As it happens, Mr. Shaban worked as a teenager in the textile and clothing factories at the Erez Industrial Zone. (The factories were demolished and abandoned as part of Israel’s 2005 unilateral disengagement, and the Hamas fees imposed on the rubble scavenging industry at Erez are the subject of my article.) Shaban shook his head as he recalled how Erez used to be “a vibrant area, with restaurants and cafes. It was a place where Israelis and Palestinians made a partnership.”

After Mr. Shaban shared his views on the new Hamas fees at Erez, he and I spoke informally about his personal background and the general situation in Gaza. Mr. Shaban worked for the United Nations and for international development agencies, then founded PalThink in 2007. His “think and do” tank receives most of its funding from Swiss organizations and produces independent reports on the political and economic situation in Gaza.

When I told Mr. Shaban of my plans to meet with a youth debate group called “Wake Up,” Mr. Shaban smiled sadly. “Gaza underneath is very dynamic,” he said. “There are thousands of these sorts of youth initiatives. The youth of Gaza are very stubborn. They feel that they have to do something, which poses a real threat for Hamas. [The youth] deserve much better than this.” He also commented that he thinks current Israeli and American policy of refusing to negotiate with Hamas “is only fueling the extremists.”

Mr. Shaban and his wife have two sons ages 17 and 12, both of whom have lived all their lives in Gaza. They’ve endured the trauma of the 2007 civil war between Hamas and Fatah and last year’s Gaza War, which claimed the lives of about 1400 Gazans and 13 Israelis. Five years ago, Mr. Shaban brought his son Nour, who was seven at the time, on business trip to Israel. Before this experience, Nour had never seen an Israeli soldier up close. At the Erez border crossing into Israel, the seven-year-old innocently tried to touch a female soldier. When asked why he did this, he replied, “I wanted to see if she was human or not.” Later that day, the boy joined his father for a meeting with an Israeli journalist. “How can he be Israeli?” Nour asked. “Where’s his gun?”
Posted by Ashley Bates at 2:42 AM